Digging Beneath Translated Philosophy: Two of this semester’s CLACs 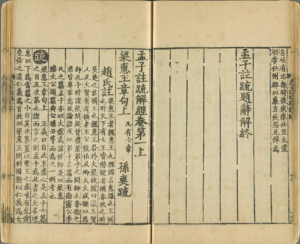 “Living a Good Life” is a large, team-taught philosophy course in which students read, debate, and put into practice the ideas of ancient philosophers about how to live well. All the readings for the class are in English, but most of them were originally written in Ancient Greek or Classical Chinese. In order to give students opportunities to get tastes of the original languages lying beneath these translations, two of the class’s instructors offered optional, half-credit “Labs” through the Cultures and Languages Across the Curriculum (CLAC) initiative.

Both Stephen Angle’s “Living a Good Life: Chinese Lab (CLAC.50)” and Tushar Irani’s “Living a Good Life: Greek Lab (CLAC.50)” emphasized the ways that using the original languages allows one to shed light on the process of, and assumptions behind, translating ancient philosophy into modern English. As one student put it, “being able to interact with classical Chinese texts in a way closer to the root material allowed me to not only extract more from the content, but also learn to be more critical about interpretations as a whole.” Another added, “Understanding the translation process, especially for philosophy, is very helpful for trying to understand nuances in the meaning.” For students who were simultaneously enrolled in Living a Good Life (which was recommended but not required), one wrote that “the lab was helpful to understand and unpack concepts in the main class.”

This year, Wesleyan is offering a total of 18 CLAC courses in languages including Hebrew, Arabic, Italian, Spanish, Mandarin Chinese, Russian, Latin, and Japanese, plus the two discussed here as well as a multilingual CLAC called “Global Hip Hop of the Non-Anglophone World.” As a whole, the CLAC initiative “aims to provide students and faculty across the campus with opportunities to deepen their engagement with their subjects through the use and further development of their language and intercultural skills.” CLAC courses are not primarily aimed at language instruction, but rather use languages other than English to allow for novel ways of accessing course material.