6 Ways to Practice Your French Before Studying Abroad

Before going abroad to France, many students are nervous about their language abilities and if their years of taking language classes will translate into using their skills in the real world. As a student who studied abroad the spring semester of 2022, I can attest that during the month of December 2021 I was trying my hardest to review the vocabulary, conjugations, and grammar rules that had been forgotten over the years. Despite this, I can assure you that while the first few weeks of your language immersion experience may be a bit difficult, you will be surprised to find how fast you pick up language conventions used by everyday French people that you were never taught in class. However, if you are still nervous and you would like to prepare for your experience, here are some tips on learning French that is used in everyday conversation.

This may seem obvious, but the language used in academic writing and works of literature is different from the language used on social media. One thing that you will learn from French people on social media is slang that is used by students. For example “wesh,” which is a way to say “yeah,” “cool,” and even “what’s up.” You will also learn some words in verlan, which is the inverse of the French word “l’invers.” Words in verlan are reversed and are used as a type of slang. For example, the word “bizarre” in verlan is “zarbi.”

This is a free streaming platform that has a wide variety of videos, 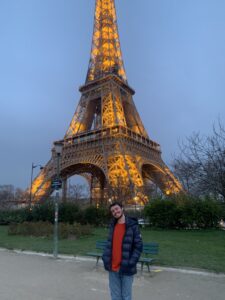 tv shows and movies in six different languages, one of them being French. There are hundreds of great documentaries, dramas, interviews, news updates, etc. in French that you can watch for free on this website. You will need a VPN to access the majority of the videos.

By watching movies and tv shows in French you will expose yourself to a faster pace of speaking that is not often encountered in the classroom. It may be difficult to separate each individual word and understand everything but with practice you will. You can start out by having the subtitles in French and when you do not understand a word you can look it up on wordreference.com, which has a great dictionary and includes slang or familiar terms that are not found in standard French dictionaries. Some shows that I recommend are Lupin, Call My Agent, The 7 Lives of Lea, Le Plan Coeur, and Standing Up. If you use a VPN to change your location to France, you will have many more options too.

4) Listen to songs in French

The French love to speak poetically, especially in songs, and by listening to their music you can learn words that you may have not heard before. This is also a cool way to learn about French culture and it will also give you something to talk about with your host family or other students at the university you attend. Some great French artists include: Aya Nakamura, Thérèse, Stromaë, Serge Gainsbourg, La Femme, L’impératrice and Angèle.

5) Read a book in French

If you find a book that you are really interested in, look on the internet and see if there is a version in French. You could also buy a book that you have already read and loved in French too. While you read the book, make sure to underline the words you don’t recognize and look them up. You can also write down those words in a journal and practice saying them during the day. My host mother, who spoke 5 languages, told me that if you learn 10 new words a day, you will be fluent in no time.

6) Change your phone’s language and keyboard to French

This is a great way to familiarize yourself with military time and various technological vocabulary. It is also a great way to expose yourself to French daily. I hope these tips help! Keep in mind that learning a new language is a difficult process but it is also incredibly rewarding. Some days you will feel more confident in your abilities and others you will feel unsure of yourself, but this is all part of the process. In the future, you will be able to look back on your journey and see how much you have improved. Remember to have fun too!