A Place as Old as Time Itself

The dulcet tones of our pilot’s southern drawl announcing our approach to the Charlotte airport after a semester abroad in the Turks and Caicos Islands seems a distant memory as I wandered the streets of the Old City in Jerusalem. A world away from the small island community on South Caicos, Jerusalem is a city like no other I had ever experienced. A place where ancient history, tradition, and religion all play fundamental roles in the daily lives of thousands of residents and pilgrims. Walking the meandering paths of the Old City my senses were bombarded by new smells: a mix of street food, spices, and cigarette smoke and shopkeepers yelling a mix of Hebrew, Arabic, and English at passersby. 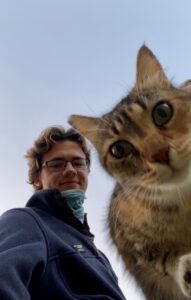 There are so many friendly stray cats everywhere in Israel!

The cacophony of noise from the street markets and the throngs of foot traffic, motorbikes, and cars too big for the ancient cobbles of the Old City made Jerusalem feel truly alive. This frenetic energy and the illusion of peace, however, were frequently interrupted, and quickly dispelled by the armed patrols of Israeli soldiers and the airport-style security checkpoints that separate areas of the city. A five-minute walk, a trip through the metal detector, and perhaps a pat-down later I passed from the Christian Quarter to the Muslim Quarter, and again to the Jewish Quarter. Each time a reminder that memories are long, offenses are not easily forgotten, and that place and how we name those spaces matters immensely to communities I will never fully understand as someone who is non-religious. 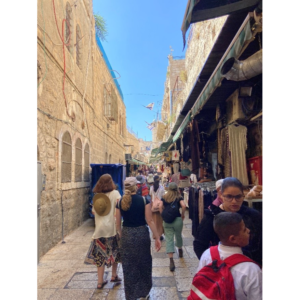 This summer I am studying abroad in Nahalal, Israel, and volunteering at the archaeological field school at Tel Shimron with several other Wesleyan students. Though I have traveled for much of the last twelve months no country has felt as culturally different to the United States as Israel. Hebrew and Arabic are spoken most often, the weekend lasts from Friday to Saturday to honor the Sabbath, and at the program we eat a kosher diet … meaning no more bacon cheeseburgers unfortunately. Meat and cheese meals aside, the short time we spent in Jerusalem made it clear to me that this summer would be a wholly new and exciting adventure that has even forced me to confront how archaeology can be abused to tell specific narratives and achieve geopolitical goals.

Our tour through the Old City led by the Christian evangelical school Jerusalem University College showed me how powerful religious storytelling can be in shaping interpretations of buildings and locations. 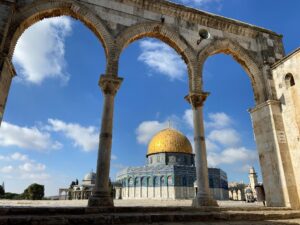 Almost all the places we visited were affiliated with Christianity. By comparison, the Western Wall and the al-Aqsa Mosque, the holiest and the third holiest Jewish and Islamic sites, respectfully, seemed like addendums to the birth of the Christian faith and the life of Jesus Christ in the heart of the only Jewish state in the world. Even our hotel was a crusader fort, which is owned by the Catholic Church and serves a refuge for religious pilgrims. The preeminence of this specific Christian evangelical narrative felt inescapable at times and made me appreciate how inextricably linked archaeology and faith are in this country and the telling of its history, for better or worse.