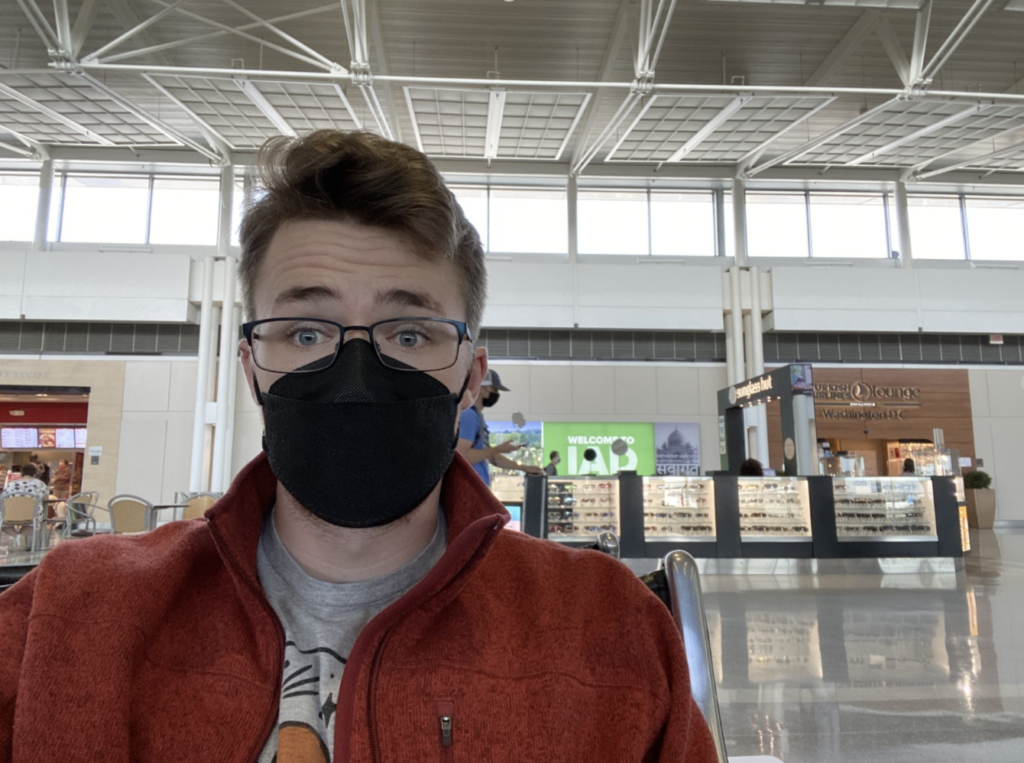 Day 1: Made it to Dulles and found my gate. Some Pete’s coffee was a nice surprise before my flight.

Travel often doesn’t turn out as you’d perhaps dreamed or even planned. Sometimes Murphy’s Law feels as if it hangs like an albatross around your neck. Whatever could go wrong … will, and often you can do little about it. But that’s what travel really is. Whether it’s an airport dash that ends in heartbreak as you watch your plane taxi away or being stranded on some stretch of tarmac somewhere, we’ve all been there and whether or not you know it, you’ll be there stuck in that cramped, uncomfortable airplane seat helpless in a queue of 14 planes one day too.

That’s not to say travel is always excruciating or you’ll be sweating bullets as you sprint across an airport during a one-hour layover … but it might be and you may just be that odd member of the crowd frantically apologizing for your clumsy sprinting on your way to your gate. That’s how my first day of study abroad went, fueled on two hours of airplane sleep and plenty of adrenaline and coffee. As John Steinbeck once wrote, “the trip takes you” and not the other way round. There will almost certainly be mishaps and mini tragedies along your travels but that’s all part of the adventure. 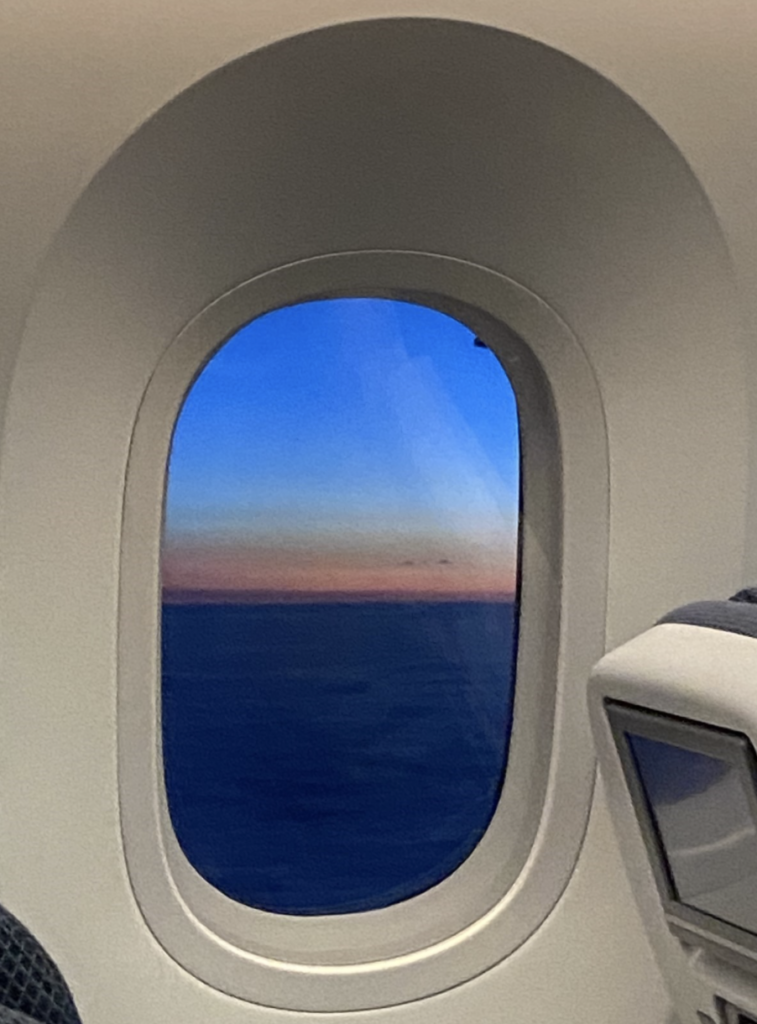 Day 2: Sunrise over the UK, perhaps a false dawn considering what was to come.

This morning I ran through Heathrow only to be greeted by a “queue” of several hundred people after my flight was delayed twice resulting in a missed connection. Many strained conversations followed before a dash to Caffe Nero, a local British coffee chain comparable to Starbucks, where I couldn’t figure out how to order a normal coffee. Much to my disappointment there apparently was none. To my “barista in training” as his shirt read, a black coffee meant latte and so I settled for that before schlepping my way back to the British Airways desk. I was finally given a seat on a flight but had 30 minutes to make it through security to my gate. I’m carrying medication and I was stuck in yet another “queue,” the British love their “queues,” waiting for the inevitable inspection of my bag. At long last, and after what seemed like an eternity of fretting, hand-clasping, and nervous wait-shifting I was released on a mad run to catch my flight before it took off in 10 minutes. At the gate, I was greeted abruptly by a bald, bearded British man as I rounded the corner yelling “Hey lad are you goin to Edinburgh?!” I hastily replied “Yes,” gave him my boarding pass, and ran down an escalator, don’t do that. Past a flight attendant I flew who queried “Nick Bowman?” But I was already past her and running for the door before I shouted over my shoulder “YES!” And then I made it, through the door I burst into first class drenched in sweat and clearly to the displeasure of the high-brow Brits of the first few rows. I was also frantically scrambling to get new ice for my meds and I felt like the center of attention as I scrounged on the floor of the aisle for my cooler tucked in my bag. Thankfully I then found my seat and an amiable American father of another study abroad student going to Edinburgh and we struck up a nice conversation. 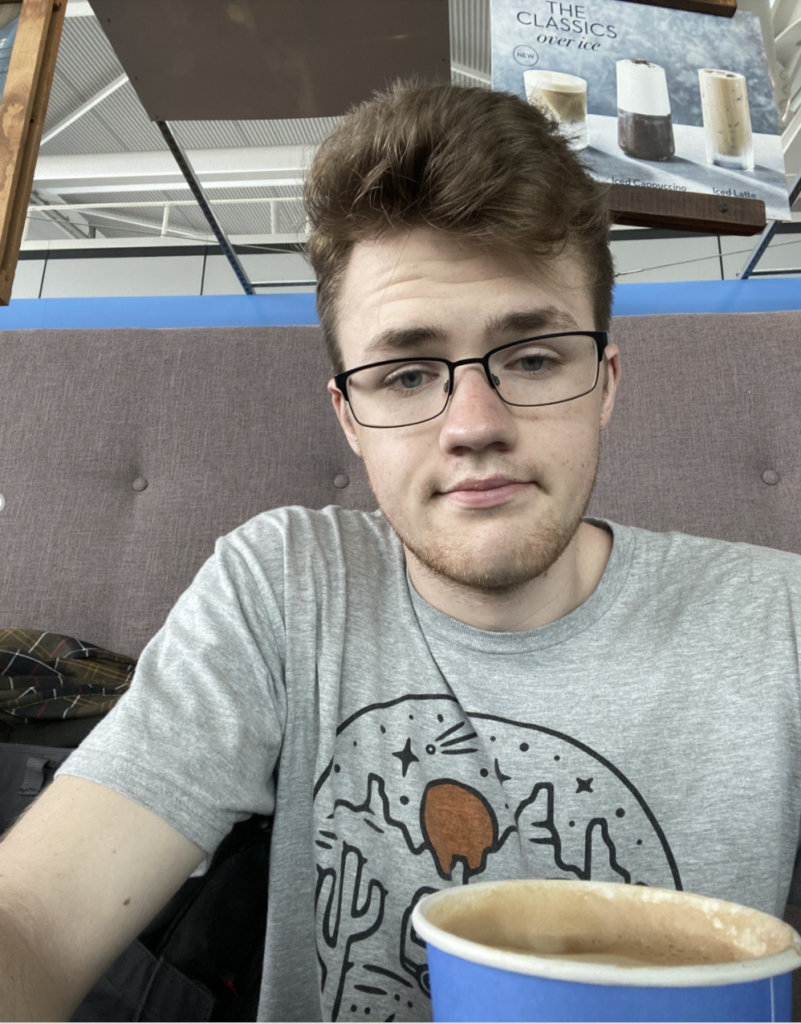 Day 2: Thoroughly stuck in Heathrow, unable to order a normal coffee from the “Barista in Training,” so a latte it was.

And that’s where I am now writing this post, climbing to 28,000ft, covered in sweat next to a sleeping flight attendant and a friendly all-American dad on my way to Scotland. And I haven’t even been gone for 24 hours! I still have no clue if my checked bag made it on the flight or whether my friend knows I’m on my way, as I don’t yet have a SIM card, but that’s all part of the experience that is study abroad. I don’t know what lies ahead, perhaps more delays and cancelations, or maybe castle tours and a night at the pub, but it’s all about taking both in stride and accepting crises and spellbinding joy for what they are. An adventure.