One Thing I Forgot While in Madrid

Rosh Hashanah and Yom Kippur (the Jewish New Year and Day of Atonement) are the most important Jewish holidays. Celebrating this year in Madrid looks a little different than usual for Rebecca Dowd. Rebecca is majoring in Science and Society and Hispanic Literatures and Cultures. She is currently studying abroad in Madrid, Spain.

I was one of 6 Jews in my high school in my hometown. For years, as the high holidays approached, I prepared to miss school and attend synagogue, and prepared to be the only one missing the day. Coming to Wesleyan, where there is a large and thriving Jewish population, was a readjustment. For example, last year the majority of my floor was fasting for Yom Kippur. Now it’s important to note that I lived in the Bayit (the Jewish house on campus), but the very fact that there’s a house with the intention to celebrate the Jewish community was different.

Moving to Madrid for the semester, I was prepared for plenty of adjustments: a new language, a new culture, living with a family I didn’t know… the list goes on and on. I was so caught up in all of these adjustments, I wasn’t really thinking about my Judaism. 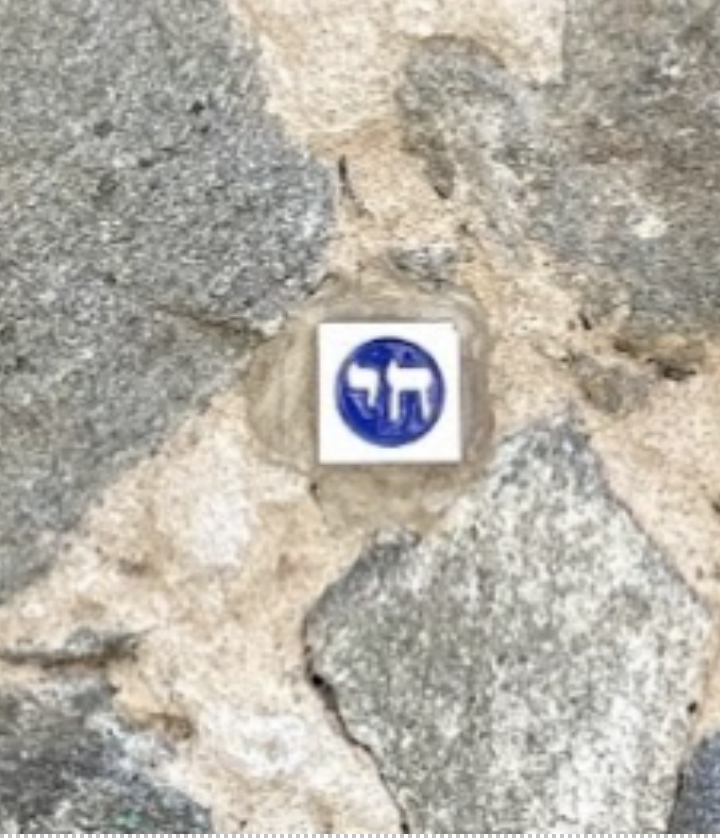 This tile reads “chai” in Hebrew, which basically translates to “alive.” It’s an important symbol in Jewish culture. Tiles with this and other important Jewish symbols were scattered amongst the cobblestones in the Jewish quarter in Toldeo.

That is, until I woke up on a Tuesday, and realized it was Rosh Hashanah. More importantly, I realized I hadn’t made any arrangements to celebrate. In retrospect, it’s a little ironic, as not even three days ago I’d been to Toledo, a city where Jewish and Sefardic history is everywhere. We’d spent two hours wandering through what had been the Jewish quarter, and even toured two historic synagogues. We talked extensively about the thriving Jewish community that had existed, right up until the Spanish Inquisition, when in Jews were forced to go into exile or convert to Christianity.

There were centuries where Jewish and Muslim communities lived in peace with Christians, and the important contributions of these communities are widely discussed and celebrated. But I didn’t think about the upcoming holidays, because we didn’t talk at all about the ways in which people in Spain practice Judaism in the present. It became clear at 8am that Tuesday morning that this is because there are barely any Jews practicing today in Spain. This disconnect is fascinating and confusing and tragic.

And it meant my Google search for “Rosh Hashanah services near me” turned up nothing. After trying a variety of combinations of “Madrid,” “Jewish” and “Rosh Hashanah” I eventually found two Jewish communities in Madrid, one reform and one orthodox. But I could find no info on either website for attending services, not even virtually. It was time to give up and accept I had nowhere to go to celebrate the new year.

I was surprised by my disappointment. Honestly, I’m never all that excited about attending services at home, so I hadn’t expected to want to go with so many new and exciting things happening. But at home, whether I attend services or not, I know I’m surrounded by community. The realization that I was halfway across the world from my community, in a place where the language spoken is not my first, and being Jewish makes you different struck me abruptly. I was lonely. 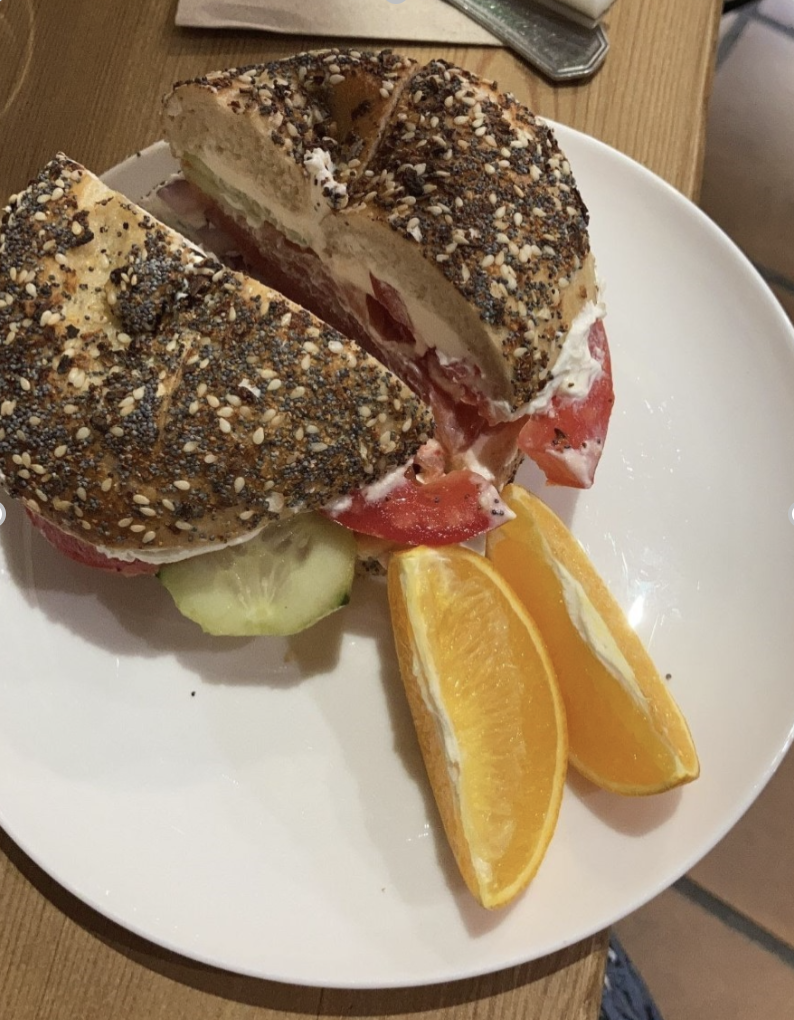 My everything bagel from Mazál Bagels, with the works (smoked salmon, tomatos, onions, capers, cucumbers, and too much cream cheese.)

But I was determined to mark the holiday in some way, so I set off on an adventure to find the traditional food of my people: bagels and lox. Though bagels are not a common food in Madrid, they exist, and after a 15 minute walk I was sitting in a cafe, munching on my everything bagel with way more cream cheese than I like, and the capers annoyingly falling out of the sandwich and onto my plate. It was almost like being at home, except minus the community.

With a name like Mazál Bagels, and the woman working behind the counter wearing a shirt reading “challah at your girl,” the cafe’s atmosphere was as close as I was going to get to something that resembled my community. And because of this, on a whim, I asked the woman in the punny shirt if she knew anywhere I might be able to find a circular challah (a special Rosh-Hashanah treat). I had low expectations, but miraculously she pulled a one out of the freezer: the last one left! Not only did I get to eat circular challah covered in honey, I got to share it with my host family. In doing so, I shared an important piece of myself with them, bringing me another step closer to creating community in Madrid. 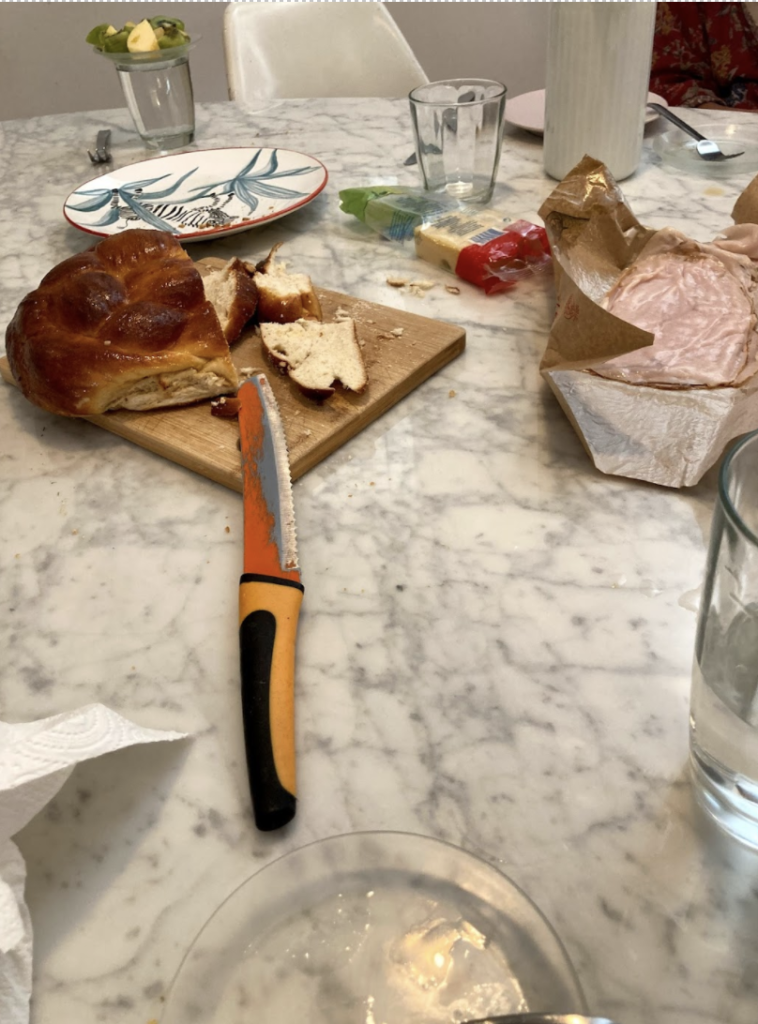 The traditional Rosh Hashanah circular challah (this one was honey-coated to symbolize a sweet new year) at my host family’s kitchen table, among the breakfast spread.

And 10 days later, when Yom Kippur rolled around, this time I was prepared. Now I knew that going to services was important to me, because of the community it would bring. So just before Kol Nidre started, I got on the metro in my white clothing, and headed to a community center. Surprisingly, for a service that was exclusively in two languages that are not my first, it was the most comfortable I’d felt in all my time in Spain so far. I wasn’t worried about trying to communicate, all I needed to do was be present.

Though the tunes weren’t exactly the same, the melodies were close enough to those I grew up with, that I could sing along with ease, even adding in some of my favorite harmonies. And though the Spanish transliteration looked very different from what I’m used to, the words and meaning to Avinu Malkeinu are the same in Hebrew, no matter whether you’re reading them in the US or in Spain. Though I was in a different country, and the service was in a different language, and I didn’t know a single person there, I knew I belonged.

Trying to figure out how to be at home in yourself in a whole new country and culture is a challenge, especially if you’re in a place where an important part of your identity is virtually nonexistent. Being able to find that space where I knew I belonged took the pressure off. It allowed me to throw myself a little further into unfamiliar and uncomfortable spaces, because I had somewhere I could fall back on: a community where I knew I belonged. And, if all else failed, at least I had bagels. 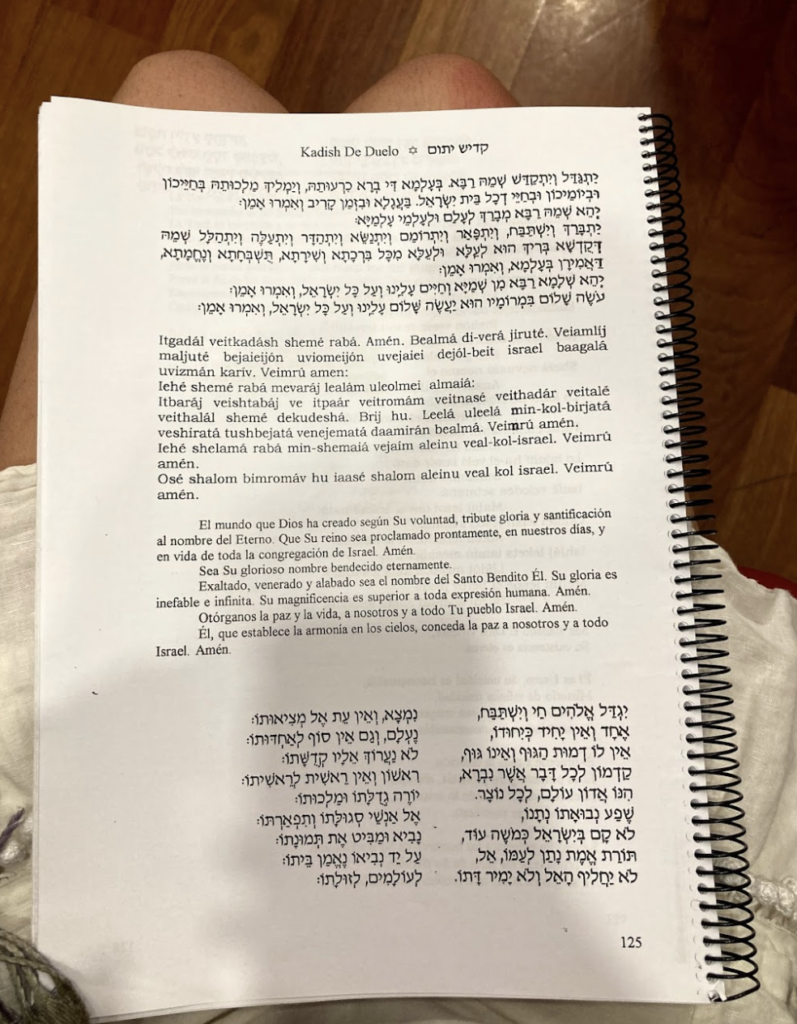 The Machzor (high holiday prayer book), opened to Mourner’s Kaddish, which is a prayer to honor the dead, said at the end of every traditional prayer service. Here you can see the Hebrew and the Spanish transliteration, which looks very different to the English transliteration.