Interviews Regarding the Re-entry Process after Study Abroad: Overall Findings and Future Considerations

When I initially thought of writing a blog post for Wes and the World, my first thought was to focus on the re-entry process when returning from abroad. Returning from abroad can be extremely difficult, and is oftentimes associated with feelings of isolation, changed feelings about one’s home country, as well as changed relationships with friends and family back home. Personally, I found myself struggling with returning back to the United States from Tanzania. I questioned the purpose of me being there in the first place, and also, simply really missed the program. While abroad, I never followed the advice of keeping a journal or another means to document my experience. As a result, when I decided to become an ambassador, I hoped that I could provide students with resources to make the re-entry process easier. I also hoped that being an ambassador would help me reflect more on my own experience. 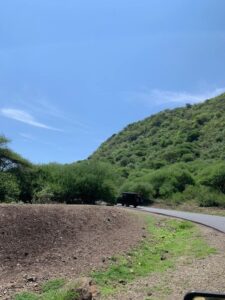 Vehicle used for game drives and seeing wildlife in Tanzania

Over this past winter break, I decided to conduct interviews with some students having previously traveled abroad, specifically centering around their experience with re-entry. There were a variety of different responses to the question of re-entry, with some students really struggling with returning to Wesleyan, whereas others found that returning from abroad made them come to terms with both the positives and negatives of going abroad. There was one interview from a previous student that really stood out to me, as her program was cut short due to civil unrest in the country she was in. She had to be evacuated from the country prematurely, leading to feelings of a lack of closure to her abroad experience. Learning about her story made me think about the many students who went abroad when the COVID-19 pandemic hit. Many students were only a month or two into their programs when they were forced to leave their abroad country, taking courses online for the last few months of their program.

Another point raised in the conversation that stuck out to me was the significance of being a U.S. citizen when going abroad, or attending a university within the U.S. abroad. In these times of emergencies, whether it be civil unrest or a worldwide pandemic, being a U.S. citizen, and particularly a white U.S. citizen, comes with some sense of security and even a feeling of invincibility. Oftentimes, U.S. citizens are among the first to be given priority to be evacuated from a place or situation that is deemed dangerous. 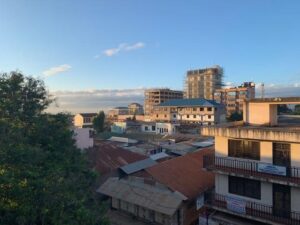 The city of Moshi, in Tanzania. Most of our time was spent in a rural village, so experiencing city life was very exciting.

Overall, my experience interviewing different students who had previously studied abroad went from an open-ended question to a discussion about the significance of being a U.S. citizen abroad. The discussion took a different direction than I had initially expected, but I am glad that it did, as I believe it helped both the people I was interviewing and myself reflect more on our purposes, intentions, and impacts abroad.

For future students studying abroad, I hope that you take a moment to check in with yourself periodically in the study abroad process, whether it be before, during, or after. This could be in the form of a journal or blog post to family or friends, or even speaking with a variety of different people surrounding your experience. It may lead you in different directions, and force you to think about things that may be challenging or difficult, but is regardless a valuable part of the study abroad experience.