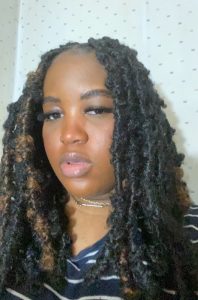 Zubaida Bello ‘22, an African American studies and history double major, Mellon Mays Undergraduate Fellow, and Fall ‘21 Center for Humanities Fellow, was awarded a Beinecke Scholarship, which will support her graduate education and her goal of becoming a college professor.

Zubaida is one of 16 college juniors across the U.S. who received the Beinecke this year. In 2020 this honor was awarded to Katerina Ramos-Jordán ‘21, who is also a Mellon Mays Fellow.

The Beinecke Scholarship “seeks to encourage and enable highly motivated students to pursue opportunities available to them and to be courageous in the selection of a graduate course of study in the arts, humanities and social sciences.” Each scholar receives $4,000 immediately prior to entering graduate school and an additional $30,000 while attending graduate school.

Zubaida, whose family immigrated to the U.S. from Nigeria, grew up in New York City and attended Hampshire College for two years before transferring to Wesleyan. At Hampshire, she created an independent curriculum that combined ethnography, history, and poetry to tell the personal stories of women in her family. With this project, she won New York City’s poetry slam and joined the New York City slam team, established an open mic collective in the nearby community, and wrote a manuscript that was later published as her debut chapbook, How to Stop the Burning.

For her Mellon Mays research project at Wesleyan, Zubaida is studying the causes behind gentrification in Brooklyn. Comparing colonization and gentrification, she is using archival and ethnographic research to examine the experiences of gentrified peoples, housing rights activists, gentrifiers, and redevelopers. After graduating from Wesleyan, Zubaida plans to pursue a Ph.D. in history at an institution in New York City to develop a theory of history that focuses on its often overlooked actors. She said: “I want to develop a pedagogy of history that gives due importance to the rebellious actions of marginalized people, that evades the apathy that often comes with eurocentric, patriarchal standards of neutrality, and understands diverse modes of storytelling as other forms of history.”

Zubaida plans to share her research findings with nonprofits in Brooklyn, such as the Housing Rights Initiative or the Brooklyn Tenat’s Council Inc. “Ultimately, I want to become a professor because I want to teach other people with my new understanding of history, build bonds with the communities I research, and publish books that exhibit my interdisciplinary understanding of history,” Zubaida wrote in her Beinecke essay.