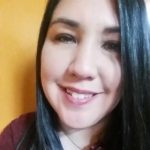 The Office of International Student Affairs (OISA) welcomes their new SEVIS Coordinator, Angela Hickman. Angela joined the OISA team in the fall semester, most recently serving as the International Student Coordinator at HB Studio in New York. She will be advising Wesleyan’s international students on immigration topics, creating and maintaining their records in the Student and Exchange Visitor Information System (SEVIS), and overseeing OISA’s outreach and communications. 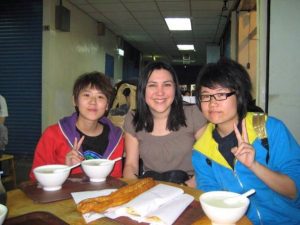 Trying cuisines with new international friends as a start to learn a different culture for Angela.

Growing up in multicultural Hawaii, Angela has always had friends and neighbors from many different ethnic backgrounds. The potluck parties she grew up enjoying were a colorful array of cultural favorites with roots from Japan, China, Korea, Portugal, and the Philippines served alongside Hawaiian dishes. When she moved to the U.S. Mainland for college, Angela was “hungry” to try the foods of her new international friends and classmates. Tasting new cuisines is still one of her favorite ways to start learning about a different culture.

Angela’s international experiences include working in South Korea and attending graduate school at the University of Warwick in the United Kingdom. Coworkers in Seoul helped Angela to navigate life in the work world and introduced her to trendy, historic, and artsy neighborhoods around the city. Earning her master’s degree in intercultural communication as an international student educated Angela beyond her classroom walls, as she enjoyed mugs of tea with flatmates from China, India, Taiwan, Sudan and England in the evening after her studies. 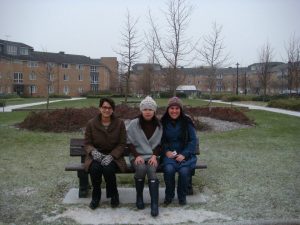 At the University of Warwick

Starting a new work position during the COVID-19 pandemic can often feel strange and confusing, just like starting a new school year in this situation does. Angela looks forward to the day when she can meet Wesleyan’s international and globally minded U.S. students in person. Until then, she urges you to keep your masks on and your spirits up!